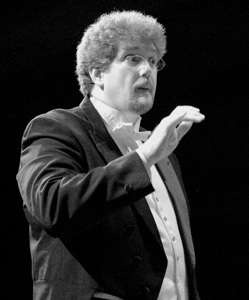 A number of conductors tout themselves as “philosophers of the podium”, but Mark Perlman really is one – besides his long experience as a conductor, he also has a Ph.D. in philosophy from the University of Arizona, and is Professor of Philosophy at Western Oregon University. ;Dr. Perlman teaches classes in Philosophy of Music and Philosophy of Art (as well as many other areas in philosophy), and has numerous published writings in philosophy. His educational background, technical expertise, and performance experience in both classical music and jazz have enabled Dr. Perlman to bring a broad range of qualifications to conducting. He began in music playing guitar and singing, and at thirteen moved on to string bass, following in the footsteps of his father, David Perlman, who was Principal Bass with the Cleveland Orchestra. He began studying conducting in college, but was known even in his teenage years to use a chop stick baton to conduct in front of the stereo. He actually made his conducting debut with his Junior High School orchestra conducting the Bach Brandenburg Concerto No. 3. During college, he studied in Munich, Germany for a year, and traveled Europe to hear every major European orchestra, and over the years he has become an expert in historical orchestral recordings. The result is an unusual depth of perception and insight. His flair for presentation was definitely illustrated in a series of educational radio broadcasts he made in Scottsdale, Arizona as well as in his work as an announcer for a weekly classical radio show in Ohio early in his career.
Dr. Perlman won Honorable Mention in the 2011 International Conducting Workshop and Competition in Macon, Georgia. He studied conducting at the University of Arizona with Dr. Leonard Pearlman, and has worked with conductors such as Jorma Panula, Markus Lehtinen, Petr Gribanov, Leonid Kochmar, Sian Edwards, Adrian Gnam, Robert Gutter, Oleg Proskurnya, Alexander Polishchuck, Murry Sidlin, Daniel Lewis, Don Thulean, and John Farrer. In addition to conducting the Willamette Falls Symphony since 2001, he is currently the Associate Conductor for the Hillsboro Symphony.

He has also conducted other orchestras in the Portland area, across the U.S., as well as internationally in Germany, Russia, Romania and Bulgaria. He was featured on Romanian television for his September 11, 2006 concert in honor of victims of terrorism. In February 2007, he led the Willamette Falls Symphony and the Portland Mormon Choir in a very successful concert of Beethoven’s Symphony No. 9. He conducted a recording in 1997 for CD of the Beethoven Piano Concerto No. 4 with the Scottsdale Symphony and pianist Nicholas Carey.

He also has a theatrical flair – he was three times been as narrator of poems accompanying Saint-Saens Carnival of the Animals, twice with the Salem Chamber Orchestra, and once with the Hillsboro Symphony.