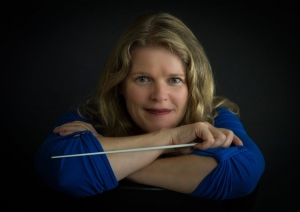 Anna Edwards has made a significant impact to the Seattle music scene as a performing artist, music instructor, and orchestra conductor. After performing as a professional violinist and music educator for over 25 years, Anna shifted her focus from instrumentalist to conductor. After training with Michael Jinbo at the renowned Pierre Monteux School for three seasons, she received her Doctor of Musical Arts Degree in Orchestral Conducting from the University of Washington. She currently balances her time between conducting in the Pacific Northwest, serving as a guest conductor/clinician across the country, and developing young musicians through instruction and collaborating with professionals in concert settings.

As music director of the Seattle Collaborative Orchestra (SCO), Anna‘s enthusiasm for promoting talented youth, creating community engagement, and nurturing musicality have been described as “… a win, win, win venture on so many levels…. Anna Edwards has taken a creative approach to career development and continuing education, community building, music education, re-invigoration of classical music, [and] encouraging the creation of new music…this really had it all.” – Dave Beck

In the SCO performance of Jennifer Higdon’s Concerto for Orchestra, Edwards’ conducting was described as “strong and committed” and “…always ‘in the moment,’ showing clarity of beat, intensity and focus, comfortable enough with the technical demands of the conducting and of the scores to focus on the musical matters at hand….the conductor’s face is alive to each musical gesture and the nuance.” – American Prize

Prior to taking on conducting as a full time profession, she performed as a freelance violinist in the Seattle Metro area playing with such groups as the Pacific Northwest Ballet, Northwest Sinfonietta, Auburn Symphony, Silsbee Piano Trio, and multiple other chamber ensembles.