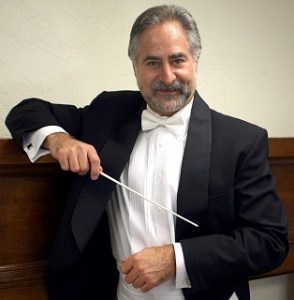 Alan Futterman is the Music Director of the Bremerton Symphony, the Peninsula Ballet Orchestra and the Academy Chamber Orchestra. He was previously Music Director of the Dover Symphony Orchestra, Principal Conductor for the Weierstrass Society Concerts of Contemporary Music (New York, NY), and Conductor in Residence for Jeunesses Musicales of Europe. He has served on the Music Faculty of Manhattan School of Music and Central Washington University. Locally, Mr. Futterman has been a guest conductor with the Seattle Philharmonic and the Yakima Symphony Orchestra. Conducting one of his own works elicited the following recently published review, “Last season’s performance of Futterman’s Romanian Medley, was received so graciously that it even elicited cheering from the audience – a gesture usually reserved for sports, not symphony.”

Mr. Futterman holds a Master’s degree from the Juilliard School of Music with two years of Doctoral studies in Musicology and Baroque Performance Practice. He spent one year pursuing Jazz studies and composition at the Berklee School of Music with Charles Mariano. While still a Doctoral candidate, he served as Assistant Conductor to Maestro Vladimir Kin of St. Petersburg and participated in master classes with Sir George Solti and Leonard Bernstein.

For nearly ten years Mr. Futterman had a parallel career in foreign languages and cultures. Employed by the American Cultural Exchange, he served as a cultural liaison for visits from foreign governments and universities. This, in turn, led to three years of work with the television series “Northern Exposure” as a technical advisor, scriptwriter and multiple language coach.